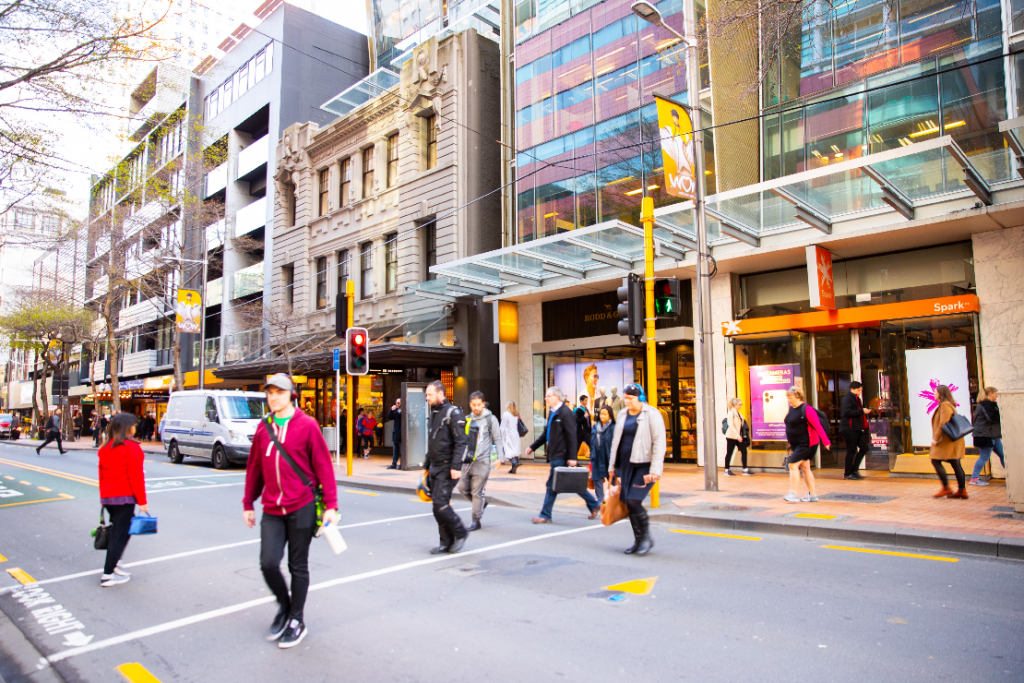 Better access and safety for pedestrians across multiple central city locations is on the way, with a suite of intersection improvement projects due to roll out as part of the Let’s Get Wellington Moving (LGWM) three-year works programme.

Wellington Deputy Mayor, Sarah Free, told the NZ Walking Summit in Wellington that the aim was to complete the first Central City Pedestrian Improvements projects by the end of the year, or early in 2022.

Improvements are planned for the waterfront and its side streets, along Vivian Street and between the Terrace and Waterloo Quay. The Terrace to Quay corridor has been prioritised to start detailed design and construction this year, with work on the other two corridors due to commence in 2022.

In the first stage, pedestrians will get greater priority and additional safety measures on intersections at:

Improved traffic lights and signals to enhance pedestrian safety and accessibility, raised or widened crossings, kerb extensions, new pedestrian crossings and a new median island at the Whitmore Street and Stout Street intersection are all part of the plans. In some locations, there will be trials to give people more time to cross, with the traffic effects being monitored.

“These busy areas are shared by high volumes of people wanting to connect into the government, office and shopping precincts. So they are the ideal candidates to be first cab off the rank in the Let’s Get Wellington Moving projects to improve life for people walking, or those who need to use mobility aids to move around our city,” Sarah Free said.

“Creating more effective separation from traffic, safer crossing signals, speed moderating measures along with more time and places to cross, will make the whole experience of being a Wellington pedestrian much calmer, safer and efficient.”

Also speaking to the summit on walkability and public transport, Greater Wellington Transport Committee Chair Dr Roger Blakeley supported the decision to start the pedestrian improvements in this part of the central city.

“Seeing these development works coming up soon is a positive sign of more to come from the programme. These are upgrades that will genuinely enhance the way people and traffic safely share central Wellington’s streets, ultimately making it easier for people to get around on foot – an important step in our region’s journey to carbon emission reductions,” he said.

Let’s Get Wellington Moving is a joint initiative between Wellington City Council, Greater Wellington Regional Council and Waka Kotahi. Ms Free and Dr Blakeley are both members of the programme’s Governance Reference Group.

Phase 2 intersections (construction to start in 2022)