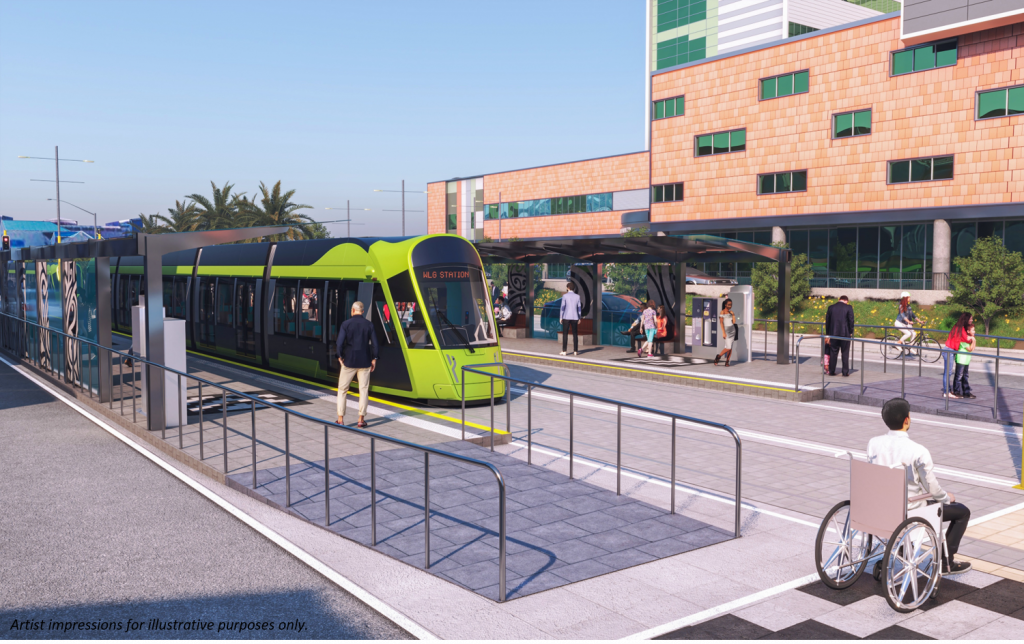 “This is a once-in-a generation opportunity to make transformational change. Wellington is saying hello to a brighter future that will be welcoming more people. We are going to need more places to live, and smoother greener ways of getting around with fewer vehicles,” says Let’s Get Wellington Moving acting programme director David Dunlop.

“Our goal is to build a world-class Capital that we can all be proud of with streets that are beautiful and safe so that new housing and business will flourish. We won’t need to use our cars as often so can cut back on our carbon emissions. This is about building a better future for the city and region that we love,” says Mr Dunlop.

The four options for public engagement are:

1.     South coast light rail + new public transport tunnel – Moving the most people possible to and from Island Bay and surrounding suburbs, beautifying the Basin Reserve, supporting the most housing and urban development, and making our streets better for everyone

2.      Bus rapid transit to the sea and skies – Moving more people to and from Island Bay and surrounding suburbs, eastern suburbs and the airport, but with less housing and urban development than option 1.

3.      South coast light rail – Connecting the most people between Wellington Railway Station, Island Bay and surrounding suburbs, encouraging the most housing and urban development, making our streets better for everyone, and providing some public transport improvements to Hataitai, Miramar, and the airport.

4.     South Coast light rail via Taranaki – Light rail to Island Bay and surrounding suburbs but via Taranaki St, bypassing the Basin Reserve, beautifying streets and encouraging the most housing and urban development, for the lowest cost.

The options are described in the at-a-glance summary here.

“From November 2 we’re inviting everyone to visit www.lgwm.nz/hello, learn more about the options, and have their say on Wellington’s future,” says Mr Dunlop.

Mass rapid transit to enable up to 21,000 more houses

The centrepiece of the four options in the transformational programme is mass rapid transit, either light rail or spacious elongated electric buses.

Mass rapid transit will improve connections and travel options between the central city, and the southern and eastern suburbs. It will see complete renewal of streets along the route and enable more housing in a large part of the city.

It’s expected that between 50,000 and 80,000 more people will call Wellington home over the next 30 years. New mass rapid transit, improvements at the Basin Reserve and an extra Mt Victoria Tunnel are needed to support this growing population.

“As Wellington’s population grows, we’ll need to build more homes that we can afford and are closer to where we need to be. And we need to act now on climate change. To do this we need state-of-the-art public transport to move more of us around Wellington quickly and reliably.”

“Alongside the WCC district plan and urban development changes, such as those proposed with bipartisan political support on 20 October, mass rapid transit can help transform the city and enable up to 21,000 extra houses by 2050. That’ll mean more jobs, more businesses, and a more vibrant city.”

“The options are about enabling more people to live centrally and be closer to jobs and education. Getting around will be safer, easier, and healthier, with less reliance on cars. You’ll have high quality public transport that’s more reliable, and better ways to walk and cycle around the city,” says Mr Dunlop.

Two high-capacity mass rapid transit types are proposed as part of the options:

Both vehicle types would run on dedicated lanes, bypassing congestion through busy parts of the city, and on shared lanes where traffic is lighter.

Mass rapid transit would make trips through the central city much quicker and more reliable. By the mid-2030s, compared with standard buses, public transport trips in busy morning times are estimated to be:

The options include improvements at the Basin Reserve and an extra Mt Victoria Tunnel. These will provide better connections within the city, to and from the southern and eastern suburbs, and between the region and Wellington Regional Hospital and Wellington Airport.

In options 1-3, local traffic would be physically separated from northbound state highway traffic. The Basin Reserve would no longer be a busy roundabout but would be completely transformed to make it easier for everyone to breeze around, through or beside the Basin. In option 4, the Basin would remain a roundabout.

All four options would result in an extra Mt Victoria tunnel, adding separate space for people to walk and cycle. Options 1 and 2 would add new dedicated lanes through Mt Victoria for public transport, making daily commutes safer and more enjoyable.

This engagement is about programme options, not the details

“This public engagement is about which elements should be in our transformational programme, NOT the details of those elements,” says Mr Dunlop.

“Considerable work has been done on the programme to develop these options, but we need to check in with the community before going further. We’ll develop detailed designs in the next stage of our work.

“Information and images are indicative only, and subject to change. Multiple options are still on the table and any impacts on individual properties are unclear at this point,” says Mr Dunlop.

“Your feedback will help us decide which option moves forward for more detailed investigation. We want to hear from people what you like, dislike, or think is missing from our options.

“We’ll share what the community has told us and there will be further opportunities to have your say on more detailed proposals in the next stage.”

Mass rapid transit, along with Let’s Get Wellington Moving’s wider plans to improve public transport, walking and cycling, will provide high-quality alternatives to private vehicle travel for many trips in the city.

“We want to encourage Wellingtonians to consider other ways of getting around, which will help reduce the number of cars using our streets and make travel more reliable for those who need to use a vehicle in the city and to and from the wider region.

“Ideas include working with schools and workplaces on new options and ‘pricing’ incentives such as parking levies or congestion charges. We will be consulting further on these in future phases of the programme,” says Mr Dunlop.

Let’s Get Wellington Moving has removed the ‘climate friendly’ leaf rating visual icons on its engagement website hello. lgwm. nz and replaced these with written descriptions to summarise more fully the projected impacts on carbon emissions of its four transformational options. “Determining potential carbon emissions for the programme options is a complex process incorporating many variables.

Over six weeks from 2 November to 10 December Let’s Get Wellington Moving is making it easy for people to have their say on four options to enable the transformation of Wellington, alongside Wellington City Council’s Our City Tomorrow engagements on proposed District Plan and bike network changes.