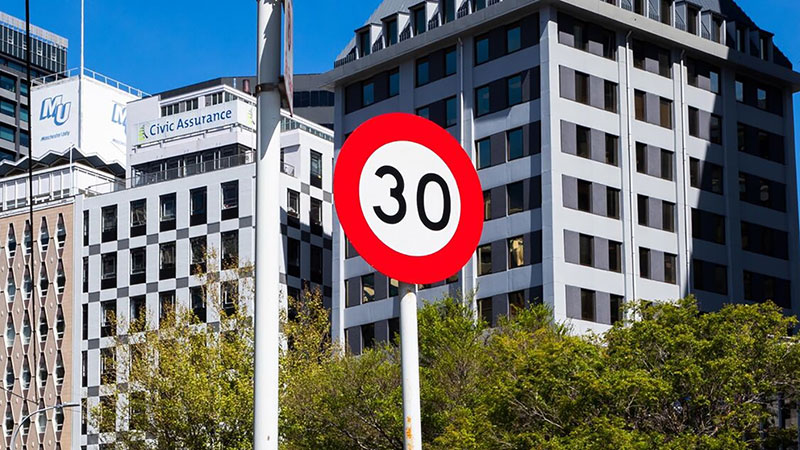 Lowering the speed limit to 30km/h in the central city is one of the early changes under the Let’s Get Wellington Moving programme, which aims to move more people with fewer vehicles. Consultation on the final proposal showed 64 percent support from the public. The change will take effect from the end of July.

Councillor Jenny Condie, the Council’s Associate Transport Portfolio lead said “Lower speeds are a key feature of central cities around the world as they help make the streets more people-friendly and support the vitality of street-facing businesses.

“Lowering the speed in Wellington’s CBD is a good first step in encouraging more people to walk and cycle in the central city while we work on long term plans to make these modes even more attractive.” Mayor Andy Foster said: “Council has been wanting to reduce central city speeds for several years. Lower safer speeds will help improve amenity for street-level cafes, restaurants, outdoor public spaces and parks, and will make our central city feel safer and more attractive for people visiting, shopping, cycling or for recreation, in short a better place to spend time.”

The final decision by Wellington City Councillors was welcomed by Let’s Get Wellington Moving partners.

Roger Blakeley, chair of Greater Wellington’s Transport committee says this is a commitment to people’s safety in the city and a much-needed step towards shifting travel behaviour.

“We need to do everything we can to make our roads and streets safer and this is a very sensible step. Safer roads and streets will also give people confidence and encourage them to hop on buses, walk and take their bikes to get where they need to go.”

“We need to have a vision for our city and our region that encompasses the full range of travel modes. This is a very positive sign that we are heading in the right direction,” adds Cr Blakeley.

Waka Kotahi NZ Transport Agency Senior Manager Robyn Elston says while work is underway on investigating the larger projects in the Let’s Get Wellington Moving programme, we need to make a start now on moving more people with fewer vehicles.

“Let’s Get Wellington Moving brings together transport improvements and urban development to create the kind of city people want to live and work in. We want to create a sustainable transport system that better manages urban growth and reduces harm to people and the environment.

“We also need to acknowledge the important role the road network plays in moving people and goods to and through the city. Retaining a 50km/h speed limit on the main roads gives a strong direction on where the through traffic should go,” Ms Elston said.

The consultation was open from 24 February until 31 March and the team received 1712 submissions from individuals and organisations. Over half of the respondents strongly supported the proposal with a further 12 percent supporting the proposal. Submitters saw the proposal as favourable to people walking and riding bikes, for people with mobility issues and for people who live and work in the area.

LGWM’s vision is for Wellington to be a great harbour city, accessible to all, with attractive places, shared streets, and efficient local and regional journeys.

Concepts for the Golden Mile released

Consultation is now open on a proposal to lower speed limits on most central city streets to 30km/h. The project is part of the Let’s Get Wellington Moving (LGWM) programme. LGWM programme director Andrew Body says it's clear that people want to see change in how we move to and through the central city.